I can’t see any errors in the console. Or even in the render logs. The site just keeps loading until there is a request timeout.

It says “Failed to load resource: the server responded with a status of 504 ()”

I put the client folder inside of the root folder of my repo this time. And the service I used is Node rather than Docker.

My GitHub repo is here

Contribute to Bl1xvan/mernportfolio development by creating an account on GitHub.

And the name of my site is
https://mernportfolio.onrender.com/

It looks like you’re trying to run a monorepo, which Render has support for. Your client folder looks like a “create react app” project, and the server a Node Express server.

However, they also seem to have some dependent cross-over, as your backend seems to serve the built “client” files.

A more common pattern would be to deploy the React site to a Static Site and the backend to a Web Service and have them interact with client-side calls.

In your case, it looks like you’ll need to correct your Build & Start Commands to be a little more complex, maybe something like:

These commands are only my guess based on what I can see from your repo, but you’ll know what you need to do to get your app up and running.

I’m seeing cd server in the start command. Do I need that even thought I don’t have a server folder?

If I don’t put the word concurrently in there the build fails because of that. Should I put it into the build command like this?

I’m seeing cd server in the start command. Do I need that even thought I don’t have a server folder?

It looks like you have a server folder to me: 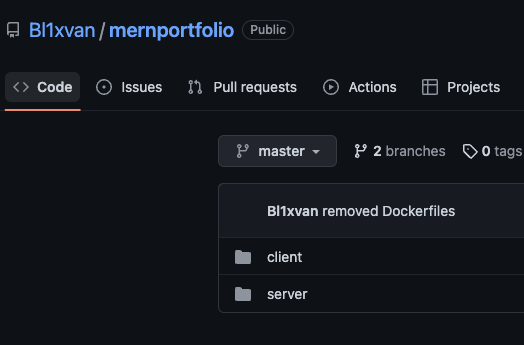 Deleting and recreating services wouldn’t make a difference. Your current build command only installs one package npm install concurrently. Your package.json files are in the subfolders, so you’ll either need to set a Root Directory, or cd into them. As they call each other, traversing into each folder seems necessary.

I’ve made my suggestions above, this isn’t a Render issue, it’s a case of getting your application ready for production deployment. You’ll know your app the best, but from what I can see in the repo my suggestions may be worth a shot, even just to rule them out to work toward your own solution.

Oh! This shows the master branch. In this topic I’m referring to the main branch

Seems odd to have both main & master branches, which are also different. But even so, the process would be similar.

I’ll admit I went a little nuts here. I’ve been trying and failing to deploy this portfolio for around 2 months now.

We really are well beyond the scope of our support here, but I see the issue.

The tutorial you’re following isn’t great. However, when it gets to the deploying to Render part, it uses two service method that I mentioned earlier:

A more common pattern would be to deploy the React site to a Static Site and the backend to a Web Service and have them interact with client-side calls.

Now you need to create a Static Site from your same repo/branch:

Once that’s complete, add these to the “Redirects/Rewrites” of the Static Site:

Then visit the Static Site URL.

And the client page is finally up! But it doesn’t seem to be fetching the api as is.

These are the errors I’m getting now

I changed the fetch api to the server site instead!

Then I added the cors extension into my app.js on the server site!

Thank you so much for helping me get to this point @al_ps!! Like I said, I’ve been trying to get this site working for MONTHS!!

Very glad to hear you’re up and running!

Thanks for using Render!