Hello
I am new to Render and have encountered an issue while trying to deploy my repository to Render. I’m not quite sure what steps to take as I’ve only tested my web app locally.
Any help is appreciated.
Thanks in advance

It’s looking for index.js in the root of your project, a couple of things to check:

Thanks for the reply

I’ve checked my repo and see that, indeed, ‘index.js’ is not at the root.
However, the file does exist within a folder called ‘src’ in the root.

Does this file path not point to the folder?

Would the correct file path look like this?
'/opt/render/project/src/src/index.js ’

Or is there a better way to point to the file ‘index.js’

Your code is stored in /opt/render/project/src/ on Render Native Environments.

It looks like this was coming up from a Start Command of node index.js So if the file in within a src folder in your repo, the Start Command would need to be node ./src/index.js

Hi. Thanks for the suggestion.
I made the changes for my Start Command and it looks like the deploy works until I hit another error:

How would I configure my package.json file so this resolves, or is there something else that I need to be doing so that I am able to import files for my app?
I’m guessing that the way my files are packaged or configured to run on Render isn’t optimal for what I’m trying to do…

And it includes a suggested a solution:

It seems adding "type": "module" to the top level of your package.json may resolve that issue. Searching for these errors brings up quite a lot of resources, as it appears to be a common NodeJS stumbling block.

Other things to consider when deploying your projects:

Hi
Thanks for the suggestion. I’ve made the following changes with some success:

The build seems to be succesful as seen in the logs:

However it seems strange that my project is running as ‘localhost’. Is there some configuration here I need to do so that my app will run via a Render host?

Ultimately, the deployment is determined as ‘failed’ even though the final statement in the log indicates ‘Compiled Succesfully’ (not seen in picture above).

I think I’m getting closer to a succesful deployment, but again, there’s something missing…

On a Web Service your Build Command would still need to install dependencies, so like my previous example, it should probably be npm install; npm run build;

The start script appears to be starting webpack-dev-server, you wouldn’t want to use that in production.

I’m getting the impression this project is actually a Static Site. Maybe that’s worth a try?

With a Static Site your dependencies are installed automatically, so your Build Command would just be npm run build

There’s no Start Command on a Static Site, just the Publish Directory, which with webpack defaults to dist

Hi
I took a closer look at my code and saw that a few packages needed some updating. I also realized that I was pointing at the incorrect repo. 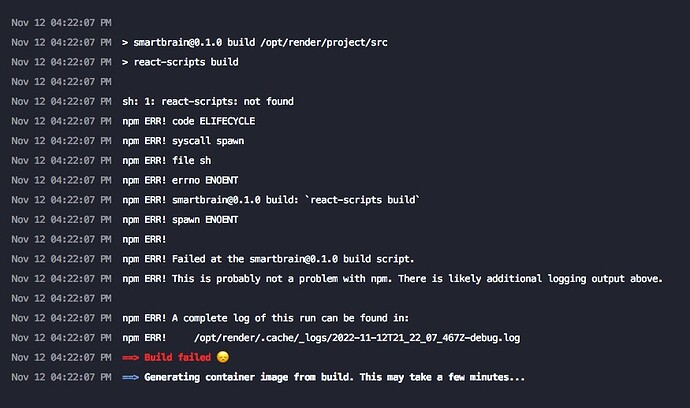 This indicates I do not have react-scripts in my packages, even though I am quite certain they exist when I am able to run my app locally - where I’ve checked my ‘package.json’ file I’ve made sure to update ‘react-scripts’ to most recent possible.

What could be the cause of failing to load the react-script?

I found your service, but there are still issues that I’ve covered before:

Hi
Thanks for the reminder about the Build Command.
I did not have ‘npm install’ with my ‘npm run build’.
After including both commands, I’ve succesfully deployed my app!

My site does use a Node back-end that accesses a database and connects with an API of another site, so I was pretty sure that the Web Service was what I needed.

Thank you for your help.

From the look of your repo, your API interactions are client-side, so you don’t need a Web Service with this static React project. You’re also still starting a development server for production use, which probably won’t perform as you expect. Obviously, you know your project better than me, so I’m glad to hear you’re up and running.

How would I start my app as a production server?

My purposes for this project is simply to display my app in action. It is in no way a full-on app that is a business or otherwise heavily relied upon. Would a production server be over kill?
I did notice that it takes a very long time (by web standards) for the site to be active from clicking/opening the URL.

Also, I use a database for User logins and registration. I’m in the process of setting up a PostGRS database with Render and configuring my code so it will use the Render database instead of the current database on Heroku.
Would my site still be considered Static?

It looks like a static site, so you could try deploying to a Static Site as I outlined in detail above.

If the app isn’t completely static, then you should look at the deployment docs of Create React App: https://create-react-app.dev/docs/deployment/#other-solutions